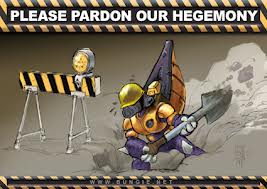 Hegemony describes various forms of political and social imperialism. Hegemony is the indirect control of one country or people over another. This power is typically coercive but does not reside within a political system nor features a physical control. Hegemony explains the underlying superiority of one group and the ways in which their political, economic, social, and cultural systems control another group whose ways of life are deemed inferior.

The original and broad definition of hegemony defines power of “Western” and “first world” counties’ ideas and traditions over those of the “East” or “Third-world.” One example of this form of hegemony is seen in the spread of modernity as technology throughout the world. This technology, such as the Internet and Facebook, began in the “West” and has disseminated around the world. A hierarchical system is created wherein the “West” has superiority, and allows "Third-world" nations the privileges of the Internet and other technologies. The “West” has the ability to withhold modernity from the rest of the world. Therefore, the “West” holds the hegemonic power.

Hegemony not only describes conflicts between countries, but also can refer to the indirect control of one group or class, usually the upper class, in a specific society. This sub-category of hegemony is called cultural hegemony. Here, typically, the culture of the upper class of a society dominates the rest of society, imposing their specific cultural norms. These norms eventually become the status quo and accepted as permanent and true. As Mike Donaldson writes, “Hegemony involves persuasion of the greater part of the population particularly through the media, and the organization of social institutions in ways that appear ‘natural,’ ‘ordinary’” (3).

In terms of gender, hegemony is used to describe the dominance of patriarchy ; the control men have and have had over women and society. This control is hegemonic because it is neither direct nor explicit. Throughout much of history, men performed the duties outside of the home, while women worked within the home. For the most part, this division of labor was not contested. Over time, however, and with the entrance of money into society, masculine work became valued monetarily, while women’s work remained uncompensated. As a result, masculine work became valued above that of women. Men dominated society through the patriarchal nature of political and public life. Their priorities placed above women’s. The term “hegemonic masculinity ” was created as a central critique of masculinity and this gendered history (Donaldson 3).

Judith Butler writes about the need to attack and undermine “masculine hegemony” (46). This masculine hegemony holds to traditions that are deeply ingrained in our society. This does not mean, however, that they cannot change. Hegemony goes beyond political restraints, since women are now granted voting writes and almost all other political rights as men. Rather, this hegemony resides in every sexist joke or degradation towards women. It resides in the pay gap between men and women: 77¢ to the dollar.

Masculine hegemony not only persists in the discussion between the sexes, but also in relation to queer society (Butler 46). Here, the status quo is heterosexist relationships and homosexual, queer and other relationships are deemed inferior. One sees this everyday in marriage equality debates as well as assumptions about ones’ sexual orientation ; the idea that everyone is straight until proven otherwise. This form of hegemony is known as heteronormativity , which combined with homophobia “are the bedrock of hegemonic masculinity” (Donaldson 3).

Hegemony is closely tied with oppression and is difficult to combat since it is not a direct or physical control of one group over another. In every instance, whether between two international factions or between men and women, hegemony describes the unfair, coercive, and semi-invisible treatment experienced by a group in society.

Retrieved from "https://genderlitutopiadystopia.fandom.com/wiki/Definition_of_Hegemony?oldid=5020"
Community content is available under CC-BY-SA unless otherwise noted.