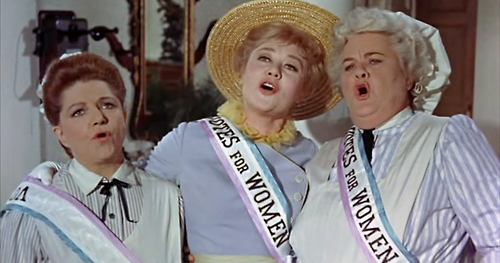 First-wave feminism was a movement spanning from the late 19th century to the early 20th century in the United States that focused on giving women the right to vote, resulting in the coining of the term “suffragettes” to describe its participants. This wave ended with the implementation of the Nineteenth Amendment to the Constitution in 1920, which prevents any U.S. citizen from being denied the right to vote on the basis of sex . Groups such as the Women’s Temperance Union, the National Woman Suffrage Association and the American Woman Suffrage Association tirelessly worked toward this goal.

In Gender Stories, Foss, Foss, and Domenico point to the fact that in working toward the passing of this amendment, the “suffragists advocated for a change in gender roles [and]… often violated conventional gender roles themselves” (Foss 47). Using the freedom and power given to them through their work as well as this amendment, these women showed that women had the ability to play a decidedly major role in modern American society.

The first major accomplishment of first-wave feminism was the creation of the Declaration of Sentiments at the 1848 Seneca Falls Convention in New York. The document, drafted by suffragists Elizabeth Cady Stanton and Lucretia Mott, put to question the androcentric nature of modern society and made the claim that women at that time were not being awarded the rights they deserved. Notably, women were not the only people in attendance at the convention; men actually made up the majority of the signers. This indicated that despite the low status of women at that time, gaining enough popular support to manifest universal suffrage was not impossible.

Once in the public eye, Stanton, along with fellow suffragist Susan B. Anthony, travelled across the country orating on the subjects of the undeniable socio-political inequality in the U.S. and the responsibility of the American public to consider approving universal suffrage in order to remedy that inequality. However, public addresses were not the only modes of communication used by first-wave feminists; many feminist writers rose to prominence through their activist works.

The publication of Mary Wollstonecraft ’s 1792 work A Vindication of the Rights of Women enabled the increase in prominence of future first-wave feminists. In her book, Wollstonecraft argues that men and women are equally deserving of an education—a sentiment frequently echoed in Charlotte Perkins Gillman’s Herland through Gillman’s focus on women as “kind, quiet, steady, ingenious” tutors of the male explorers as well as their own children (Gillman 43). Wollstonecraft’s monumental work paved the way for the publication of later first-wave feminist works including Simone de Beauvoir ’s The Second Sex, and Marie Stopes’ Married Love, and was preceded by Phyllis Wheatley’s Poems on Various Subjects, Religious and Moral. Later, Betty Friedan’s The Feminine Mystique became quite influential for second-wave feminists in that it pointed out to mid-20th century women that despite the passing of the Nineteenth amendment, their lives remained far from perfect.

In addition to these written works, first-wave feminism was marked by the courageous actions of suffragists Alice Paul, Lucy Burns, Carrie Chapman Catt, and others who risked life and limb for the cause and “introduced militant tactics to the [movement]" (Krolokke 3). Following a series of non-violent protests against President Woodrow Wilson’s refusal to support the suffrage amendment, Paul, Burns, and their colleagues were imprisoned on the charge that their picketing obstructed traffic. Further, during their imprisonment, the women staged a hunger strike to protest the terrible conditions of the prison and were subsequently tortured through force-feeding.

The United States was far from being the first country to implement women’s suffrage; women had the ability to vote in New Zealand as early as 1893, in Finland by 1906, in Norway by 1913 and even in the notoriously oppressive USSR by 1917. In England, the homeland of the aforementioned Wollstonecraft, more women started working away from home and attending Universities by 1910. Feminist Louise Weiss led the cause for women through La Femme Nouvelle in 1930s France. Decidedly, feminism was not solely an American cause.

After the passing of the Nineteenth Amendment, Alice Paul proposed an Equal Rights Amendment to the constitution that would continue to increase the rights of women beyond having the right to vote. While this amendment was never passed, the majority of individual states have adopted its conditions into their own constitutions. Further, much of second-wave feminism revolved around the debate over the ERA and its potential to give women concrete constitutional rights and protection. Work to pass this amendment continues even today.

Retrieved from "https://genderlitutopiadystopia.fandom.com/wiki/First-Wave_Feminism?oldid=5015"
Community content is available under CC-BY-SA unless otherwise noted.