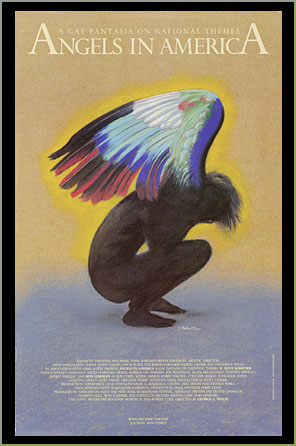 Theorist Judith Butler views gender as a cultural construct that is not as “seemingly fixed as sex ” (Butler 8). Because it alludes to the fact that one’s gender may differ from one’s biological sex, Butler’s gender theory has been widely accepted in the gay community, a people whose sexual desires and mannerisms may not conform to the heteronormative expectations of their society. Due to the increasing commonplaceness of the queer voice in popular culture as well as the adoption of queer theory into the theoretical canon, this concept is being explored more freely in the literary world. Queer playwright Tony Kushner’s work is an example of this. Through the transitory nature of their gender performances , the male characters of Tony Kushner’s Angels in America demonstrate gender as being a social construct that is defined by the people around them.

The character of Roy Cohn, much like his real-life counterpart, is immediately established during his first appearance in the play as being both influential in his work as an attorney and very comfortable with his position as a high-ranking male in American society. His phone conversation with the wife of a judge characterizes Roy as one to frequently patronize women; he manipulates Mrs. Hollins into seeing a play of his choosing—“Cats! It’s about cats. Singing cats, you’ll love it”—while his secretary, here only known as “Baby Doll,” procures the tickets (Kushner 19). Here, Roy is enacting a classically heterosexual male gender through his conversational dominance while subsequently calling a musical about cross-dressing “fabulous. Best thing on Broadway. Maybe ever” (Kushner 19). This gender fluidity is explained through Roy’s perhaps futile desire to hide his more feminine characteristics behind the powerful machismo brought out in performing his profession. Knowing that his professional success would end should his sexuality be revealed to the public, Roy frequently uses his forceful personality to his advantage and occasionally even uses his power and connections as professional threats.

Most telling of Roy’s inner turmoil about the impermanence of his gender is his tense appointment with his doctor. Henry, unable to break the news to Roy without inciting indignation, watches as Roy tries to spin his AIDS as a more “heterosexual” disease:

“This is not sophistry. And this is not hypocrisy. This is reality. I have sex with men. But unlike nearly every other man of whom this is true, I bring the guy I’m screwing to the White House and President Reagan smiles at us and shakes his hand. Because what I am is defined entirely by who I am. Roy Cohn is not a homosexual. Roy Cohn is a heterosexual man, Henry, who fucks around with guys… AIDS is what homosexuals have. I have liver cancer.”

Despite the physical evidence of his homosexuality, Roy uses his enacted male gender to enforce his self-perception as a heterosexual man. He claims that his “clout,” a quality lacked by homosexuals, bears evidence of his heterosexuality that his AIDS diagnosis cannot refute. Indeed, until his illness gains enough strength to send him to the hospital, Roy’s male gender performance demonstrates his supposed heterosexuality to any potential doubters—including himself.

Roy’s usual hyper-masculinity is compromised, however, through the shifting power dynamics between himself and Belize, who eventually becomes his nurse. The powerful bravado evident in Act I is replaced by a series of weak attempts at exerting dominance over his “butterfingers spook faggot nurse” through spewing insults and expressing disdain at Belize’s sexuality (Kushner 160). Through this name-calling, Roy both exposes feelings of disgust at his own sexual inclinations and brings attention to his recent disbarment and subsequent loss of the “clout” he so desires. By choosing to hate Belize due to his feminine gender performance, Roy here exposes his vulnerability and anger about certain feminine qualities of his own that he attempts to suppress—those that emerge during his sexual encounters as well as his invitations to other men. When Roy eventually gives into the inevitable and conveys to Belize “a serious sexual invitation” to “escort [him] into the underworld,” he enacts a female gender that he would have never let come through in the presence of a straight man (Kushner 208). These gender negotiations resemble those of Joe Pitt, Roy’s clerk, in that both frequently attempt to hide facets of their personalities that may reveal certain ugly truths they hope not to confront.

Joe’s constant struggle to pass as straight prompts him to enact a gender performance based on emphasizing his masculinity —a stereotypically heterosexual quality. Upon meeting Louis, whose first instinct is to describe Joe as “a Gay Republican” based on the fact that he “sound[s] like” he is gay, Joe grows immediately defensive and aggressively disputes Louis’ assertion (Kushner 35). Both Joe and Louis are uncomfortable with the direction of their conversation, mostly due to Joe’s suspiciously vehement denial of Louis’ claim and subsequent awkward attempts at learning if he truly “sound[s] like a...” homosexual once he makes “sure no one else is around” (Kushner 36). In this moment of surprising vulnerability, Joe is enacting a female gender through his admittance to Louis of suppressed femininity in his countenance and voice. As with Roy, only with another homosexual does Joe find the ability to even hint at the truth about his sexuality and gender performance. Certainly, it takes Louis noticing the innate femininity in Joe’s gender performance for Joe to feel comfortable admitting to himself—not to mention his very Mormon family—the true nature of his sexual desires.

As a result of Harper’s prying, Joe finally comes out as gay—a decision that comes to affect his gender performance as well as his already turbulent marriage to Harper. While at first denying Harper’s accusation much like he did with Louis, Joe finally asks his wife if “it make[s] any difference? That [he] might be one thing deep within, no matter how wrong or ugly that thing is, so long as I have fought with everything I have, to kill it” (Kushner 46). Through his quasi admittance of his homosexuality, Joe maintains a male gender because of his determinedness to suppress the qualities his religion does not abide. Because he is a Mormon, Joe’s stigma as a gay man doubles in that both society at large and his religion refuse to accept or support his sexuality; therefore, Joe’s hesitation to come out is understandable if not justifiable. That said, this tense moment with Harper prompts Joe to pursue a relationship with Louis and find enough romantic satisfaction therein to offer giving up “anything,” even his “skin” for him (206). Notably, Joe had neither the courage nor the desire to cross the boundaries of his religion for Harper. With Louis, Joe can finally give into his feminine characteristics and feel in his lived reality a sort of personal freedom he had never before experienced. The fact that the play ends so unceremoniously with Joe’s decision to re-ascribe to the gender binary—and the tenets of his religion—and then lose both Harper and Louis in the process speaks to the tragedy of this conflicted character.

Although Louis Ironson is openly gay, his story resembles that of Joe in that their gender performances vary wildly from their shared sexuality. Louis’ gender performance sees a great deal of shifting depending on his situation; he professes to getting “closety” at his grandmother’s funeral, yet he alludes constantly to his femininity during his first conversation with Joe, wherein he claims to be crying due to a “run in [his] nylons” and explains that “[his] name is Louis, but all [his] friends call [him] Louise” (Kushner 25, 63). Similarly, upon beginning a relationship with Joe, Louis acts as the more feminine partner and often calls Joe out on his “very butch, very heterosexual high school” behavior (Kushner 163). His feminine gender performance around Joe suggests that Louis feels most secure in his sexuality when his partner is less so. While Joe is only beginning the process of overtly expressing his sexual desires, Louis feels confident and in control of his own. Conversely, Louis often acts as the heterosexual male figure in his relationship with Prior; this is most evident in their discussion about the health of Prior’s cat, during which Louis complains that he “wanted a dog in the first place, not a cat… Cats are stupid, high-strung predators… Dogs have brains (Kushner 26). Here, the juxtaposition between Prior’s defense of the more feminine cat and Louis’ identification with the stereotypically masculine dog exemplifies the disparity in their respective gender performances throughout their time together. Louis’ male gender performance is further masculinized by Prior’s history as a drag queen, his relatively overt femininity, and his frequent female gender performance. In this way, the character of Louis especially personifies Kushner’s view of gender as being socially constructed and defined.

Through their interactions with other characters, their gendered actions and their own self-perception, the male characters of Angels in America collectively demonstrate the diverse nature of gender expression within the gay community. Especially the three most sexually conflicted characters—Roy, Joe and Louis—show how societal stigmas as well as inner discord can lead to gender becoming “a free-floating artifice” that “cannot be said to follow from a sex in any one way” (Butler 9). Indeed, the tendency of these men to perform multiple genders throughout their respective lifetimes hints at the higher likelihood of establishing a connection between one’s social circumstances and gender rather than one’s sex and gender. Kushner’s deft depiction of such a complex process deeply humanizes the concept of gender performativity.

Write the second section of your page here.

Retrieved from "https://genderlitutopiadystopia.fandom.com/wiki/Gender_Performativity_in_Angels_in_America?oldid=4888"
Community content is available under CC-BY-SA unless otherwise noted.