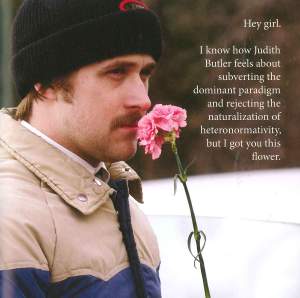 Performativity, in the context of gender , is a series of repeated actions that express, "the way you see yourself, the way other people see you, and how you fit into the larger culture" (Foss, Domenico and Foss 184).

Feminist scholar, Judith Butler, writes that one never "becomes" a man or a woman, but instead that each person is in the constant process of "becoming" a gender (45).  This assumption is based on the idea of gender as a social construction, instead of gender as a natural, biological conditon. One "becomes" a gender through performance.

These repeated actions are daily, and can be done subconciously. the "unspoken, taken-for-granted, and invisible ways of doing and being that are acquired through socialization" are called habitus (Foss, Domenico and Foss 177). Acitons in a given habitus create a sense of stability, which not only make gender appear and feel natural, but can also create a sense of fear upon disruption of those norms.

There are also intentional gender choices. These occur when a performer enters different stages. For example, a female college student may wear Doc Martens and leather jackets at her university, but pack dresses to wear at home, because she knows her parents may disapprove. This kind of forethought is called the anticipation of a gender performance (Foss, Domenico and Foss 179). Both kinds of actions infrom how an individual's gender is perceived personally and culturally.

Each performer uses nonverbal communication, such as appearance, facial expression, body language, and the use of touch and space. Verbal communication includes language patterns and word choices (Foss, Domenico and Foss 184). All perforamnces take place on a stage, such as a classroom, and an audience, such as your classmates. Often times the same action, such as a hug, can communicate extremely different messages based on the stage and the audience. Each action has a set of characteristics that are ascribed as feminine or masculine in nature. A person is more likely to be understood as a man or a woman based on the frequence of performed masculine or feminine traits.

The different tools of performance each include different expressions of power. Typically, masculine gender performances express more power than feminine gender performances. For example, men often embody masculine traits by standing upright on both feet, creating a larger personal space with a more solid physical base. Women often embody feminine traits, situating their bodies in ways that take up less space, sometimes holding their hands in front of leaning to one side. This position is weaker and communicates a more submissive stance.

Gender performances vary depending on the stage and the audience. To us the previous example, a person who identifies as a female may use feminine body language on a date, but embody masculine traits during a job interview, where strength is valued in all.

Someone who identifies as a man can perform in feminine ways while still being considered a woman. The repetition of each performance is what creates the longer lasting idea of gender identity.

Being aware of gender performance allows each individual agency to control and shape personal gender. Each person can decide when it feels good to perform femininity or masculinity. In addition to empowering the individual performers who make these choices, intentional gender performances that create non-heteronormative gender constructions have the potential to change societal norms (Foss, Domenico and Foss 201). Judith Butler encourages subversive gender performances through what she refers to as parody. One has the potential to embody the masculine or feminine traits in such an exaggerated fashion that it appears completely unnatural. This exercise forces an audience member to call heteronormative assumptions into questions, allowing space for a wider range of gender expressions (Butler 45).

Whichever performances an individual chooses to embody, the awareness of performativity will likely lead to a healthier and empowered sense of identity for the performer.

Retrieved from "https://genderlitutopiadystopia.fandom.com/wiki/Performativity?oldid=5030"
Community content is available under CC-BY-SA unless otherwise noted.