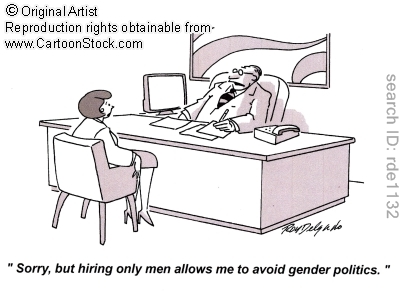 Sexual Politics, in general, are ideas and activities that are concerned with how power is shared between men and women, and how this affects their relationships. As Kate Millett writes, the “politics” in “sexual politics” is not defined by “the political as that relatively narrow and exclusive world of meetings, chairmen, and parties.” The term “politics” instead refers to power-structured relationships in which one group is c

ontrolled by another.  In other words, sexual politics is the differences in the amount of power between sexes

in a group or society and the principles governing those differences.

An example of these politics would be a patriarch society in which men have hierarchy over women. When you hear stories of someone “sleeping their way to the top” of their career or profession or bribing their boss to get more benefits, those are also a form of sexual politics because one person has more power over the other. Let’s say a male teacher wants a little extra vacation time so he starts to butter up his female boss with gifts, treats, and compliments. Although the male teacher is initiating the act, the female boss has all of the power because she is the one who will ultimately decide whether to give him extra vacation time or not.

The idea or theory of sexual politics was first examined and formulated in Kate Millett’s book, Sexual Politics, which was published in 1970. It is a classic feminist text and is also said to be “the first book of academic feminist literary criticism.” Millet argued that sex has been frequently neglected in the political sphere and goes on to discuss the role that patriarchy plays in sexual relations, looking especially at the works of D. H. Lawrence, Sigmund Freud, Henry Miller, and Norman Mailer.

Millett’s work was highly critiqued and criticized but became an important idea for the second wave feminism of the 1970s.

In the past, radical sexual politics were most often connected with leftist movements anywhere from utopian socialism and anarchism to Marxist feminism because of their crazy-at-the-time ideas that men and women should have equal power in a society. Most movements for sexual reform, homosexual rights and birth control are also closely linked to these progressive ideologies, giving more power to other genders and

sexes in a male dominated society.

Sexual politics have appeared in our class discussions over and over again in works like Herland and Angels in America, as well as in works by Virginia Woolf and Judith Butler.

In Herland by Charlotte Perkins Gilman, an all-female utopian society is presented. With only females, gone are the bounds of a patriarchy but even with a society of all one sex, sexual politics can still be apparent. The people of Herland have cats and to breed them, they have male cats but they keep them fenced up in order not to over populate. Although this is a utopia that Gilman uses to comment on the problems w

ith patriarchy and the abilities and power of women, it still has its flaws when comes to sexual politics.

In Angels in America, Roy is an obvious example of sexual politics. Not only does he view himself as more powerful than women but he also believes that homosexuals have no power even though he secretly is one. He explains what a homosexual is to him when discussing AIDS with his doctor,

Roy can admit to having sex with men but because of the sexual politics of society, he does not want to be seen as a homosexual because that means being weak and powerless in society.

In Butler and Woolf’s works, sexual politics have been viewed in a feminist light, necessitating that all genders have equal education, opportunity, and voice. Although this sounds like a great idea, it would require not only a huge social reform but also an entirely new language since so much of our languag

e is based on gender binary.

Retrieved from "https://genderlitutopiadystopia.fandom.com/wiki/Sexual_Politics?oldid=4589"
Community content is available under CC-BY-SA unless otherwise noted.